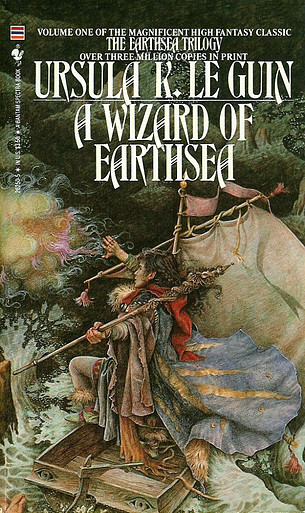 The Role of Wizardry in Earthsea

Ged’s childhood associations with magic are comparable to those of any child hoping to engage in fantastic and magical acts. A child wants to summon the animals, control the elements, change shapes, and become something other than himself/herself. Their desire for power and fame and the ability to achieve something extraordinary are only matched with their imaginations, one of the greatest assets they possess.

As with all children approaching the cusp of preliminary knowledge, Ged’s ideas of magic are challenged during his apprenticeship with Ogion. The master mage lets the rain beat on his face and bears the strife of wind with calm acceptance. He spends his time in meditation and meticulously observes everything around him. Even though it is evident he wields great power, no one sees him use it. Unsatisfied with his slow training, Ged is given the choice to go to Roke, where the “air was bright with enchantments and the Archmage walked amidst wonders (24).” The students of Roke celebrate and demonstrate their magic freely, playing pranks and creating illusions frequently. The Nine Masters of Roke and the Archmage are less apt to demonstrate their powers and when pressed to reveal their magic, they would “always talk, like Ogion, about balance, and danger, and the dark (44).” Part of Ged’s studies involve being sent to the Isolate Tower, where lives the Master Namer whose own name is Kurremkarmerruk, allegedly “a name that had no meaning in any language (46).” Ged’s sole duty in the tower is to learn the true names of as many places, things and beings as he can.

Ged’s personal turning point is the loosing of the shadow, which can be interpreted as the adolescent loss of self. Children have a clear conception of whom they are, until faced with the travails of adolescence, awareness of peer scrutiny, and the emergence of self-consciousness, self-interest, pride, conceit, and most importantly lack of interest in anything else besides the self. While children still desire to appear impressive in front of peers, they have an equal interest in those who they attempt to impress. Children make friends easily and without reservations. They do not need the vehicle of an event or an activity in order to spend time with someone and instead find friendship in just the simple act of being together. Children are known for their sponge like abilities and can learn languages, and mimic the most complex of actions because of the uncorrupted state of their interest in the world and their limitless imagination. The facets of adolescence cloud the true being and mark the beginning of a slow journey to reclaim what is lost and reshape it into the formulation of wisdom. This expedition can last a lifetime and mastery is achieved when you understand your role and purpose in life in conjunction with the rest of the world.

The Connection to Taoism

The wizardry and magic of the world of Earthsea, as well as the traits of those who practice it have familiar parallels on our world. One philosophical and spiritual Chinese tradition in particular seems to display similar concepts and ideas. In Taoism, there is an intertwining between people and nature. The chaotic disposition of nature should not trouble the people, but instead be something they can adapt to and become a part of, like the earth and the sea. There should not be any resistance, but rather a lessening of rules and order, a philosophy of inaction emphasizes this discipline

One of the central concepts of Tao is called wu wei, which can be translated as without action. Sometimes the concept is called wei wu wei, which would be action without action. In this system of thought a man is believed to have a lot of power and will, but in many cases is misdirected and therefore must find the “way” that will lead him in tune with the will and power of the universe. This causes a prominent association with Ogion and his ways. When first entering his apprenticeship with Ogion, Ged is surprised of his inauspicious beginning:

They wandered, first down into the Vale and then gradually south and westward   around the mountain, given lodging in little villages or spending the night out in          the wilderness, like poor journeyman-sorcerers, or tinkers, or beggars. They entered no mysterious domain. Nothing happened. The mage’s oaken staff that Ged had watched at first with eager dread was nothing but a stout staff to walk with. (16)

In harmony with the world, Ogion wanders around a mountain and uses his “magic” staff as a walking stick. Nothing happens and there is no “mysterious domain”, because Ogion knows his surroundings well and can travel around them with ease. He has no problem spending the night out in wilderness and is not bothered by the various hassles of nature. Ogion’s particular “inaction” indicates an intricate amount of experience and preparation. The text gives you the feeling of him having an abundant amount of power and one feels sure that there is a purpose in him not using it.

At one point Ogion asks Ged what a certain flower’s name is. Ged does not know and asks Ogion what the flower’s use is. Ogion responds, “When you know the fourfoil in all its seasons root and leaf and, flower by scent and seed, then you may learn its true name, knowing its being; which is more than its use. What, after all, is the use of you? or of myself? Is Gont Mountain useful, or the Open Sea? (18)” Ogion’s statements highlight the knowledge of essence over function. One has to recognize the scent and the movement and understand what it is. All the other aspects come along with that knowledge and reveal themselves with experience. Elements and people not having a use is not a negative, and Ogion values the essence and the existence of a certain object, rather than its utility and use. The existence alone fulfills a certain natural order and has a role in the universe.

This rare outburst of Ogion’s thoughts is similar to another concept of Tao, named P’u. According to Slingerland and Kraemer:

P’u is translated as “uncarved block” or “simplicity,” It represents a passive state of receptiveness. P’u is a symbol for a state of pure potential and perception without prejudice. In this state, Taoists believe everything is seen as it is, without      preconceptions or illusion. In the state of p’u, there is no right or wrong, beautiful          or ugly. There is only pure experience, or awareness, free from learned labels and definitions. (Slingerland, Effortless Action: Wu-Wei as Conceptual Metaphor and Spiritual Ideal in Early China, 2003, p. 233) (Kraemer World Scriptures: An Introduction to Comparative Religions, 1986, p. 286)

Ogion’s opinions resemble these Taoist sentiments and he is a loyal follower of the discipline. Later, when Ged reclaims his shadow, he is closer to understanding his own essence and gains wisdom from his newfound knowledge. These are all steps leading to understanding your role in the universe as a microcosm (a small part of a larger body).

One of the main themes of the book is the danger of shape shifting, or changing into something else for a longer period of time. When Ged turns into a dragon, he instinctively knows he must finish his battle with the other dragons quickly. When escaping the court of Terrenon, Ged changes into a hawk and flies across the seas for an extended amount of time, eventually returning to Ogion. Upon his return, he is unable to revert shapes and is stuck in his eagle’s body until Ogion manages to turn him back into Ged. By becoming the eagle, Ged has tampered with the balance and forgotten who he truly is. This falsification of the self represents lack of self-knowledge and foreshadows an eventual doom. For Ged to be a part of the universe and not an outcast (as he often sees himself), he must know his true self, every aspect of it, similar to the way he knows a fourfoil in all its seasons root and leaf and, flower by scent and seed. This ties into his reunification with the shadow, regardless of it being good or bad, ugly or beautiful (labels that have no meaning within p’u).

Essentially, through the concepts of Tao, your quest is to understand the vastness of the universe, which in turn brings knowledge of self. Ged’s journey through Earthsea is an unconscious fulfillment of that quest. Roke is a stepping-stone to Ged’s education. The masters of Roke are wise and learned, but in comparison with Ogion seem at a less advanced stage of the discipline. Their steps are ones that need to be taken and experienced, but fuller knowledge and understanding has not been completely garnered. When the Master Namer is convinced that there are no names for some things, Ogion is sure that there is a name for everything, being correct in the case of the Shadow. The Isle of Roke is still fascinated by the view of magic and dazzles the eyes with student illusions, magical fields, and trick doors. Ogion is beyond that, and lets nature take its course, convinced of its essence and role.

Unwittingly absorbing Ogion’s early teachings, Ged went to Roke and learned the importance of “inaction” through a dangerous and sobering consequence, studied the names of all things in the Isolate Tower and became one with the sea through the crafts of sailing and voyage. His education of the discipline is hectic and dramatic, but his ending is closely similar to that of his beloved instructor.