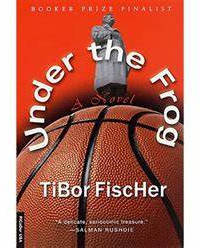 The Tears of Episodic Laughter

Tibor Fischer’s Under The Frog, ends with a scared, beaten-down, young man treading through the cold snow behind an injured countryman. Gyuri walks behind Kurucz in order to hide the tears streaming down his cheeks. Gyuri is defeated and depressed; he has left his small family behind, and the violent incursion of the Soviets has left his country in shambles, killed the love of his life, and further reinforced a regime Gyuri has detested and feared all his life. Even though Gyuri has finally accomplished his goal of escape, he does not have many things left to laugh about. In retrospect, there has never been too much to laugh about, yet the majority of the novel is in the form of a collection of sardonic, biting, and anecdotal clips of a life under the communist regime. The humor has the ability to make the reader laugh, but more often gives the impression of a bitter lament expressing the absurdity of the human condition when immersed in this particular place (Budapest) at this particular time (1946-1956). While some clips of Gyuri’s life are genuinely funny and honestly describe the travails of an adolescent’s coming of age, there are also stories that emit an ominous sense of unease and foretell a sad ending, despite a sharp and sarcastic humor. Slowly the stories merge in their commonality and carry over past occurrences and characters into the final installments. The characters begin to abide by the dictates of their past behavior and their past actions start to reveal consequences.

The novel is in an everlasting transition and tightens the plot up as it approaches the end. The gaps between the years become shorter and the chapters begin to divide themselves in months as the story picks up in intensity and the reader starts to suspect that the end is not going to be as comedic as the beginning and the middle of the novel. The plot begins to tighten on page 157, at the beginning of the chapter named November 1955. It is important to note the time and month separations between each chapter. The beginning chapter starts on November 1955, the date close to the climax of the novel. The story then shifts back to December 1944, October 1946, September 1948, January 1949, September 1949, August 1950, August 1952, and July 1954. Notice that in some cases there are gaps of almost up to two years. After page 156, the gaps are as follows. November 1955, September 1956, and 23rd October 1956. There is a dramatic change, particularly in the last two chapters, as the separation in the story is marked by only a single month.

There are very complex and intended reasons for the duality in the book’s structure. The beginning appears unfocused and confused. The events separate themselves by large gaps in time and show consistency in the characters; yet do not lead to any coherent conclusion. The times are as mixed and confused as Gyuri and his direction and focus. Near the climax, and particularly in the last three chapters, the structure changes, becomes less episodic, yet similarly fragmented and more sharply marked by events and actions leading to serious consequences. The change in Gyuri and his focus and commitment translates itself into the format of the novel. This change also brings out a more serious tone and prepares itself for an oncoming tragic end. The effect of the ending enhances as a result of the previous episodic chapters and the tightening of the plot as it approaches the end. The transitions are sometimes tricky and subtle, as with the repetition of the beginning chapter.

November 1955 is a title of chapter that repeats itself in the beginning and near the climax of the novel for particular reasons. This month marks Gyuri’s introduction to Jadwiga. The first 1955 chapter introduces the characters and sets a light tone to Gyuri’s adventures and life. He rides naked on the basketball team train, has eccentric and quirky friends, and there is poignant sarcasm in the quality of their play, their opponents and surroundings. This chapter teases the attraction he will eventually form for Jadwiga:

Despite this initial dismissiveness, Jadwiga becomes the cornerstone for a transition in Gyuri’s life and initiates the change of tone and pace of the novel. Her appearance in the beginning chapter is telling of Gyuri’s condition and the pace of the novel three quarters of the way through. So far, Gyuri is not ready for a change, and his youthful adventures and miseries will provide mirth and reflection. As soon as he gains something worth losing, his life as well as the tone and format of the novel will change. This chapter also reveals the type of regime the characters are under, as they worry about informers, and army recruiting. It also reveals Gyuri’s anxieties as he longs to escape and do even the most menial and meaningless of tasks, as long as they are in a different surrounding. It is important to note that the comic effects of the beginning chapter outweigh the perceived severity of the characters’ lives, and sets the tone for the following chapters.

In a similar fashion, the second 1955 Chapter sets itself apart from the other chapters beginning in a lighter tone, describing Gyuri’s ride on a train with a snoring passenger, comically aggravating the rest of the disturbed passengers. This beginning anecdote takes us back to the beginning of the novel and reminds us of the comedic aspects of a growing youth’s life. The mood darkens, when the story after, describes the creation of propaganda and the cruel absurdity of a corrupt regime, as a director utilizes a dying old man to push across an agenda that will only work because of the old man’s moustache. Sadly, the man passes and leaves us with a foreboding of an even more staggering tragedy:

The insensitivity and baseness of the party represents itself in the callousness of Gati. He cares only for spreading an ideological message, as opposed to caring for the people he is supposed to exalt and raise together with the prosperity of the regime. The story then transitions and describes Gyuri’s courting of Jadwiga and emphasizes the validity of his attraction towards her, and thereby shifts the novel into a more serious domain, as the reader notices a lack of sarcasm and begins to suspect that Gyuri has become emotionally vulnerable.

The following passages leave little room for humor and depict the gladness and excitement of love. After visiting Jadwiga in the library and meeting her in the café under pretences of needing to find Solyom-Nagy, Gyuri’s rising feeling for Jadwiga reveals itself through unusual behavior. When coming to Jadwiga’s dwelling, upon seeing her he exclaims that he missed her (170). In any of the previous chapters, there is little evidence of Gyuri expressing any sort of affection. He is on friendly terms with Elek and Pataki, yet never emits any signs of appreciation for their existence in his life. Mostly Gyuri is melancholic, and sarcastic. His unsuccessful pursuits of women are not for love, but rather for unsatisfied lust. The sense that Gyuri is genuine in his affection towards Jadwiga further reinforces itself in these reflections:

Gyuri develops something akin to close commitment, a concept unbeknownst to him thus far. This lack of commitment stems from the absurdity of the regime that rules his life and thence develops into the desire to flee. His life is therefore episodic, a series of events waiting for the next set. A commitment would categorize these events and force them to flow together fluidly in a single direction. Before his love has developed, Gyuri was aimless, concocting vain hopes for escape and abstract notions of what he wants and seeks. His mentality therefore shapes the format of the novel into episodic events, marked by the effect the occurrences on Gyuri. Ironically, Gyuri regrets that he has now a tighter bond with Hungary and fears that his “flight [will be] less streamlined (171).” Reversely, Gyuri’s flight out of Hungary
is now fated, as the events increase in intensity. Gyuri’s love is not something he is willing to take lightly or sarcastically. The revolution and the breaking point of the citizens of Hungary loom in the near distance. The multiple paths possible converge into three existing possibilities, continued oppression or death, liberation, or escape.

In the second to last chapter September1956, Gyuri’s exaltation of Jadwiga reoccurs frequently and the episodic gaps tighten even further to reflect Gyuri’s impatient yearning for her. Page 182 commences Gyuri’s attainment of Jadwiga and with that a small break. After that gap, the three pages following express all of Gyuri’s affections and praises towards Jadwiga:

The praises of Jadwiga surpass any feelings Gyuri has towards his country or regime. She is the most important thing in his life and the purpose of his existence. For her, he later refuses to flee the country with Pataki and spends the final chapter in search of her through the tempestuous streets of Budapest, where the revolution takes a backseat and serves rather as a backdrop for Gyuri’s furious search of Jadwiga.

The travails of his search and anxiety serve to make Jadwiga’s death even more tragic. In the aftereffect of the tank’s shot, when Gyuri notices Jadwiga “two thoughts raced through him, the axiom that stomach wounds were always fatal, and the other that his sanity couldn’t cope with this. (240)” Gyuri’s pain intensifies and forgets the war around him. This episode ends quickly and furiously, allowing the next fragment to remind the reader of the war and the different effect it has on Nigel and perpetually the rest of the city.

The fragments in the last chapters become sporadic and represent the many different aspects of the city, as well as the scattered and upset mindset of Gyuri. In the sporadic episodes there is a certain fluidity denoting a natural and inevitable course. Gyuri’s realization of escape unleashes a torrent of tears that is as mixed and jumbled as his emotions. The tumult of Gyuri’s life translates itself in to the structure of the novel. The beginning and middle of the novel provides a calm heartbeat mingled with reflection and comedic comment. The fragments are prolonged and the breaks in chapters are yearly and denote certain aspects of growing up and occurring change. The last three chapters become more fluid, yet very fragmented. The fragmentation does not take away the cohesiveness and tightness of the novel, but rather reinforces the quickening heartbeat and pace of Gyuri’s life during those two months. Many significant events occur. Gyuri consummates his love, yearns for Jadwiga, and experiences the throngs of the revolution. He experiences anxiety of loss and fear of retaliation. He faces the direct loss of his love, endures the assault of an army, leaves his home, and finally escapes. These events are quick and loaded with emotion. The novel recreates the pace of his feelings with the fragmentary structure and achieves the same anxiety within the reader.

The humor plays a large role in the novel and the frequency of it serves as a great contrast to the tragic end. The picaresque structure of the novel undergoes a change. It is certainly episodic throughout, but the beginning merges the clips with the humor and serves to accent the humor and to illustrate the growth of Gyuri. The ending fragments correlate the pace of an eventful period with the pace of Gyuri’s anxieties, emotions, and feelings. This method certainly connects the reader with Gyuri and in some cases elicits the same abseil of tears.